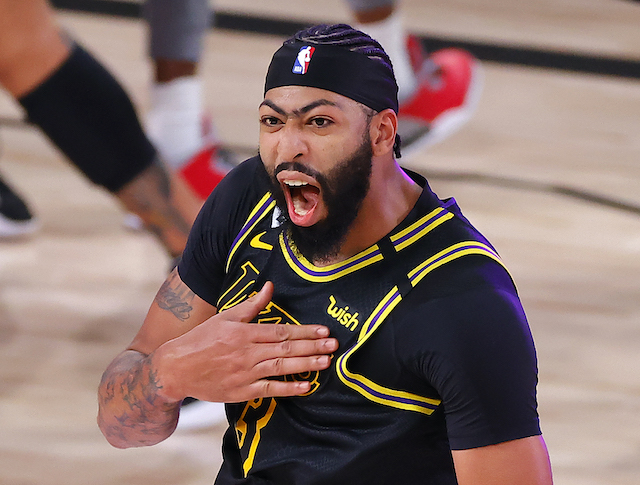 Anthony Davis yelled “Kobe” after hitting the biggest shot of his young NBA career. He sprinted down the sideline and jumped into a swarm of teammates who were eager to mob him.

Davis’ special shoutout was an obvious homage to the late great Kobe Bryant — the legendary Los Angeles Laker who had a habit of sinking game-winning shots throughout his Hall of Fame basketball career.

“That’s a shot Kobe Bryant would hit,” Lakers coach Frank Vogel said of Davis’ 3-point shot from the wing in front of the Denver Nuggets bench to beat the clock. It lifted the Los Angeles Lakers to a 105-103 victory over the Nuggets in Game 2 of the 2020 Western Conference finals inside the NBA bubble at Disney World.

“To me, AD just flying through the wing like that, catch and shoot with the game on the line in the biggest moment of our season, nothing but net, that’s a Mamba shot,” Vogel said.

It was fitting the Lakers wore the special Black Mamba Nike jerseys in their dramatic win over Denver. Davis, who has only been a Laker for one season, said it’s no coincidence the 2020 Lakers play with more “swag” while wearing the Black Mamba uniforms.

The significance of the game-winner wasn’t lost on Davis. He knew it will define his Lakers career. He also knew he put himself in rarefied air, joining a list of legendary Lakers who made unforgettable buzzer-beaters in the playoffs.

The Lakers were down 103-102 with 2.1 seconds in the game. The play was drawn up for LeBron James to catch the ball at the elbow. But Rajon Rondo saw Davis break free from Mason Plumlee, who inexplicably decided to call switch at the last second instead of fighting over the top of the screen. Rondo fired a perfect bounce pass to AD, who caught the ball in perfect shooting position and launched a high-arching shot over the outstretched arms of 7-footer Nikola Jokic and swished it with no time left. AD called his walkoff 3-pointer the biggest shot of his career. He wasn’t afforded many opportunities when he was with the New Orleans Pelicans. Being with the L.A. Lakers has allowed AD to be on center stage. He now has the mic, and he’s not about to let it go.

Kobe was no stranger to clutch shots. He was at his absolute best when his best was needed. The Lakers entered their 2006 playoff series against Steve Nash and the Phoenix Suns as underdogs. The Lakers were two years removed from the Shaq-Kobe era. This was Kobe’s team. He carried the franchise on his back during a season in which he averaged a league-leading 35.4 points per game and scored a mind-boggling 81 points against the Toronto Raptors. The Suns were championship contenders, but Kobe’s individual greatness pushed the Lakers to a 3-1 series before eventually losing in seven games. Few NBA fans remember the Suns’ comeback. Many remember Kobe’s heroics against the Suns in Game 4.

Can you attempt a shot with 0.4 seconds left? Derek Fisher proved you can. In the 2004 conference semifinals between the Lakers and San Antonio Spurs, Tim Duncan gave the Spurs a 73-72 lead after hitting an 0ff-balance fallaway shot at the top of the key. The Spurs fans thought the game was over and home team was poised to take a 3-2 series lead. San Antonio’s dreams were dashed with one improbable fling — a Fisher Fling. Before Gary Payton inbounded the ball, the Spurs double teamed Kobe Bryant to deny him the ball. Payton had to look elsewhere. Fisher flashed in front of him and received the pass. In one motion, Fisher turned to his left and fired a shot that barely left his left hand as the red light turned on. D-Fish tallied just eight points in the game, but none bigger than the last shot he swished with 0.4 seconds left. The Lakers went on to knock out the Spurs and advance to the conference finals.

For many millennials and centennials, the name Jerry West doesn’t ring a bell. In the era of Twitter, Facebook and Instagram, West’s name surfaces mostly as an NBA executive and special adviser on the Golden State Warriors. It might be time for generation Y and Z to learn some basketball history and see how West played a huge part in creating what the NBA is today. Google him, folks. West, known as Mr. Clutch for much of his career, made a shot during the 1970 NBA Finals against the New York Knicks that may never be duplicated. Dave DeBusschere’s short jumper gave the Knicks a two-point lead with three seconds left. L.A. had no timeouts, so Wilt Chamberlain quickly inbounded the ball to West, who took three dribbles before launching a desperation heave from the backcourt that somehow went through the hoop sending the game into overtime. Because the 3-point shot didn’t exist in 1970, it only counted as two points. Had West’ shot happen in 2020, it would have been an obvious game-winner. The Lakers went on to lose the game and the series, but the legend of Jerry West grew.

Robert Horry built his NBA resume around making big-time shots in May and June. Because of his uncanny ability to rise up in big moments, he earned the nickname Big Shot Bob. Shaquille O’Neal and Kobe Bryant were without a doubt the most valuable players during the Lakers’ three-peat. But the L.A. dynasty would have ended sooner without the heroics of Horry. You could make a strong argument the Lakers would not have beaten the Sacramento Kings in the 2002 conference finals without Horry. The Kings were seconds away from taking a 3-1 lead in the series when Horry bailed out the Lakers. Kobe and Shaq both had an opportunity to tie the game, but both missed. Kobe missed a driving shot in the paint while Shaq flubbed a point-blank shot in front of the rim that Vlade Divac ended up punching out instead of grabbing the ball. The loose ball bounced to the top of the key and fell into the hands of a guy with a reputation for making clutch shots. Without hesitation, Horry got his feet set and shot the ball over a rushing Chris Webber and drained it as the buzzer sounded for a 100-99 heart-pounding L.A. win. It was not only the greatest playoff buzzer-beater in Lakers history but one of the greatest playoff buzzer-beaters in NBA history.