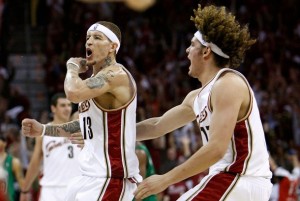 Defense wins championships. At least that’s the prevailing thought among athletes in any sport. In basketball, stopping the opposition from scoring is ultimately the difference between winning and losing in April, May and June.

To win an NBA championship, you need that lockdown defender that can take away the opposition’s best option. It is equivalent to a shutdown cornerback in the NFL. A lot of times, great defenders are left to cover a prolific scorer all by himself, and a double team was not an option. Bruce Bowen played this role perfectly. Bowen, a member of championship teams in San Antonio, did not completely stop a great scorer, but he was able to at least make it difficult and uncomfortable to score the basketball.

Shane Battier of the Houston Rockets is cut from the same cloth. Like Bowen, Battier is not asked to score a lot of points for the Rockets because his job is mainly to shadow the opponent’s top gun.

Guys like Battier and Bowen, as well as Ron Artest, Tayshaun Prince and Devin Harris, initially made their marks on the defensive end of the court and have carved up a solid reputation around the league. But what about those players who don’t get the same notoriety but are just as good on defense – or even better.

OneManFastbreak.net uncovers the most underrated defenders in the NBA. Unlike the more celebrated first-team All-NBA defenders such as Kobe Bryant, LeBron James, Dwyane Wade and Dwight Howard, who claim the majority of the votes because of their reputation and inflated statistics, these following players go unnoticed because they don’t usually make the spectacular steal or block. They’re always assigned to the other team’s primary threat on offense and play straight-up defense the entire time they’re on the court.

DELONTE WEST, Cleveland Cavaliers – One word to describe this undersized guard: Tough. His celebrated teammate, LeBron James, gets a lot of the credit for Cleveland’s defense but, with all due respect to King James and his much-improved defense, West is the guy Coach Mike Brown calls on to defend the scorers.

KIRK HINRICH, Chicago Bulls – Hinrich makes up for his lack of foot speed and athleticism with grit and a lot of grabbing. He is the master of clinging to someone’s jersey (sometimes pulling it) and getting under a player’s skin. Just ask Dwyane Wade. We like to call it the Hinrich Manuever.

KENYON MARTIN, Denver Nuggets – Despite all the knee surgeries, K-Mart still creates matchup problems for low-post scorers. He put a blanket on David West in the first round and, even though Dirk Nowitzki posted great numbers in the second round, K-Mart made Dirk work for every point.

ANDERSON VAREJAO, Cleveland Cavaliers – He may not be the best on-ball defender, but his value to the Cavaliers cannot be measured with rebounds, blocks and steals. The man they call “Andy” takes a lot of charges, and irritates a lot of opponents with his boundless energy and his Sideshow Bob haircut.

KENDRICK PERKINS, Boston Celtics – Kevin Garnett gets most of the ink and the pub, but this burly 280-pound force in the low block is tough to uproot and plays with great force. He rebounds, blocks shots and defends the pick-and-roll better than most than half the centers in the league.

RUSSELL WESTBROOK, Oklahoma City Thunder  – The former Pac-10 defensive player of the year made an easy transition from college to pro. He has extremely long arms for a guard and his quick feet allows him to beat an offensive player to a spot. Give him another year and he should make the All-Defense team.

PAUL PIERCE, Boston Celtics – Pierce is mostly known for his offense. The truth is, at this stage of his career, his defense might be better than his offense. During the Celtics’ great playoff in 2008, Pierce guarded Joe Johnson, LeBron James and Kobe Bryant. And more often than not, Pierce won his one-one-one battles.

TREVOR ARIZA, L.A. Lakers – The former UCLA Bruin is the real reason for the Lakers’ upgrade on defense. Kobe Bryant only plays defense against the elite guys. When you are a nobody, Kobe will leave you open. Ariza, on the other hand, plays defense 24/7. His length allows him to get a lot of deflections and steals.

UDONIS HASLEM, Miami Heat – Despite being undersized and overmatched more often than not, Haslem – who is generously listed at 6-8 – wins a lot of his one-on-one battles mostly with heart and determination. The Heat co-caption embodies everything Pat Riley likes in a player.

CHUCK HAYES, Houston Rockets – Another undersized frontcourt player who plays with great leverage. Former Houston Coach Jeff Van Gundy calls Hayes a great low-post defender despite his lack of size (he is listed at 6-6). He has a very strong lower body, which keeps bigger centers from backing him down.