All-Star center Dwight Howard is on his way to Hollywood to join forces with Kobe Bryant, Pau Gasol and Steve Nash. (ASSOCIATED PRESS)

Deron Williams returned to the Nets, Steve Nash and Dwight Howard are headed to Hollywood, and Jason Terry is moving from Dallas to Boston. The 2012 NBA offseason had plenty of franchise-altering moves — most of which benefited the major markets. So much for competitive balance. Some teams did better than others (ahem! Lakers), while most stayed above the fray and maintained status quo. OneManFastBreak.net highlights the winners and losers:

Mitch Kupchak locked up executive of the year with his two monumental moves this summer. He pried Nash from the Phoenix Suns (a division rival) to give Kobe Bryant the best point guard he’s ever had. Then, he shocked the basketball world by acquiring the best center in the world without giving up all-star Pau Gasol. With Nash, Kobe, Ron Artest, Gasol, and Howard, the Lakers have easily the best starting five in the NBA and arguably the greatest starting five in basketball history. The Lakers’ Fab Five are armed with two league MVPs, two defensive players of the year, and the most skilled big man in the game. Even at age 38, Nash is still a terrific playmaker and he’ll make sure Gasol and Howard will get their touches on the offensive end. The Lakers were eliminated in the second round of the playoffs mainly because their offense faltered and did not execute. Nash will step into the role of offensive coordinator and he’ll instantly make the Lakers a lethal offensive team. Howard adds to the Lakers’ great history of dominant centers, joining Mikan, Wilt, Kareem, and Shaq.

Boston reached the Eastern Conference finals in 2012 despite a gimpy Paul Pierce and a hobbling Ray Allen. Priority No. 1 in the offseason was to bring back Kevin Garnett. The Big Ticket re-signed with the Celtics, assuring he’ll retire a Celtic, and then general manager Danny Ainge added more firepower on offense by signing shooting guard Jason Terry, a member of the Mavericks’ 2011 championship squad. Terry addresses a major issue for Boston: scoring. He’ll help the Celtics avoid long scoring droughts with his ability to create his own shot and not have to depend on point guard Rajon Rondo to feed him the ball off screens. Terry can also serve as a backup point guard, giving head coach Doc Rivers more flexibility on offense.

Deron Williams was arguably the biggest catch of the summer, and he was the first to decide where he wanted to play. Williams re-signing with the Nets gives the Brooklyn franchise a centerpiece and a name on the billboard of the team’s brand new arena. But Williams won’t be alone on that billboard. All-Star guard Joe Johnson was acquired from Atlanta, giving the Nets a studly backcourt combo and plenty of firepower. The team also re-signed power forward Kris Humphries to bolster its frontline. Now, if the Mikhail Prokorov can convince Dwight Howard to join the Brooklyn party then the Nets will be the biggest winner of the summer.

Daryl Morey caught a lot of flak for letting Goran Dragic, Kyle Lowry, and Luis Scola leave town without compensation and then signed Jeremy Lin to a $25-million contract. On the outside, it looks like the Rockets are throwing in the towel. But if you look closely, Morey is fielding a team that is cap-friendly. Lin is going to be The Man in Houston, picking up the Asian fan votes vacated by Yao Ming. Lin should fit in nicely in Kevin McHale’s free-flowing, pick-and-roll heavy offense, and that’s likely the biggest reason why he chose Houston over New York (oh, the $14.8 million on the third year of the deal ain’t bad either). 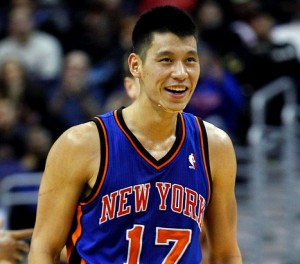 The Rockets are cleaning house for the right reasons. First-round draft picks Jeremy Lamb and Terrence Jones are very good young players, and they should figure into McHale’s rotation from the start. The Rockets’ offseason is a perfect case of addition by subtraction.

Ever since Allen Iverson left town, Philly fans have been craving for star. Enter Andrew Bynum. Bynum gives the Sixers their first significant low-post threat since Moses Malone and he immediately turns the Sixers into one of the top teams in the Eastern Conference. He’s arguably the second-best center in the NBA and, at 24, his ceiling is so high he has only begun to scratch the surface of the roof. Bynum, who won two championships with the Lakers, will be The Man in Philadelphia and his big body (7 feet, 290 pounds) in the paint will alter the way the Sixers play on both ends. Joining Bynum in Philly are free agents Jason Richardson, Nick Young, and Dorell Wright.

When Deron Williams announced his decision to stay with the Nets instead of joining the Mavericks, Frank Isola of the New York Daily News tweeted this gem: “Russian 1, Cuban 0.” That, of course, is in reference to the Nets owner, Russian billionaire Mikhail Prokhorov, getting over Mavs owner Mark Cuban, who was hoping to lure Williams to play in his home state of Texas. The Williams decision had a domino effect in the Mavs’ plan. Dallas’ all-out-effort to land Williams made Kidd a little leftout. Nobody likes to be second choice, so Kidd chose his own path by signing with the Knicks. But Kidd wasn’t the only Mavs guard to defect. Longtime Maverick Jason Terry, a member of the team’s 2011 championship team along with Kidd, is taking his talents to Beantown and join the Celtics. So, if you’re still keeping score, it’s now Free Agency 3, Cuban 0.

The only good news this summer for Chicago are the improving health of Derrick Rose coming off knee surgery and the return of Kirk Hinrich, a big piece of the Bulls’ resurgence in 2008. But take away the Hinrich signing and the Bulls have had a nightmarish offseason. Kyle Korver, Ronnie Brewer, John Lucas, C.J. Watson, and Omer Asik are all gone. All five were important cogs off the Bulls bench. Korver was arguably the Bulls’ best player in the fourth quarter, while Brewer and Asik are very good defenders. Lucas and Watson are not all-star players, but they both did an admirable job in Rose’s absence. Continuity is a big part of a championship team, and the Bulls are basically starting over with an entirely new bench unit (Marco Belinelli, Vladimir Radmanovic, and rookie point guard Marquis Teague) for the 2012-13 season. Belinelli is nowhere near the shooting Korver is, and Radmanovic is not someone you want guarding LeBron James — or any small forward for that matter — in the fourth quarter.

Phil Jackson calls the New York Knicks a “clumsy” team, and the Knicks tripped over themselves this offseason by not getting Nash. Then the Knicks made a bold move by signing veteran point guard Jason Kidd. The former Mavericks playmaker could turn out to be a better option because Kidd won’t mind running Mike Woodson’s isolation offense. Then the Knicks signed Raymond Felton, which was a little bit of a head-scratcher considering Felton was grossly out of shape last season and now he’s being rewarded for his unprofessionalism. The Felton signing basically forced fan favorite Jeremy Lin out of the rotation, and now New York enters the season the same way they left it — too many players playing the same positions. Lin was a cash cow for the MSG network and time will tell if Lin fans will keep following the Knicks.

In his letter to Magic season ticket holders, CEO Alex Martins wrote: “We look forward to this next chapter of Magic basketball and remain committed to our mission: To be world champions on and off the court, delivering legendary moments every step of the way.” Hmm. In order to win a championship, you must first qualify for the playoffs and, without Howard, Orlando will be far from being a playoff contender for the next few years. Martins and general manager Rob Hennigan were put in a tough spot. Howard made it clear that he wanted out of Orlando, but Martins and Hennigan failed to get the right deal. Sure they got some draft picks, but those won’t matter unless they’re lottery picks. It took Orlando nearly a decade to recover from the breakup with Shaquille O’Neal. When Howard came along, he made Orlando love basketball again. After eight years of basketball bliss, L.A. swoops in and breaks Orlando’s heart yet again. It’s like losing another girlfriend to the same guy 16 years later.