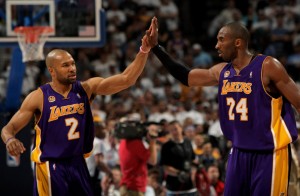 Derek Fisher and Kobe Bryant are one victory away from earning their fourth NBA championship ring. (GETTY IMAGES)

Move over Robert Horry. Step aside Steve Kerr and John Paxson. Make room for the newest member of Mr. Clutch in the NBA Finals: Derek Fisher.

When Fisher stepped into those two crunch-time shots in the fourth quarter and in overtime that powered the Los Angeles Lakers to a 99-91 victory in Game 4 of The NBA Finals, he simply planted his name into basketball lore. Kobe Bryant will most likely be the most valuable player of the The Finals, but Fisher just etched his image as the true defining moment of the 2009 Finals.

With 11 seconds left and the Lakers down by three at 87-84, Orlando decided to double team Bryant in the backcourt and rolled the dice, hoping for a miss. As soon as Trevor Ariza broke the Magic press and gave it to Fisher at midcourt, the 34-year-old savvy guard and a member of three Laker championship teams stepped into the vacuum provided by Bryant and unleashed a 3-point shot over Magic guard Jameer Nelson. It would have been one of the greatest shots in Finals history, only to be topped by Fisher in overtime when he drained a 3-pointer from the top of the arc that gave the Lakers a 94-91 lead with 30 seconds remaining in the extra session.

Two classic shots from a man who exudes class in every which way. Thanks to Fisher, who had missed his previous five 3-pointers before making his last two, the Lakers are one victory away from winning the franchise’s 15th championship banner, Phil Jackson’s record 10th title as coach and Fisher and Bryant’s fourth ring.

“In a championship run, you gotta have moments where you just need big plays. Tonight was one of them. Trevor made a big three, Derek obviously made two big ones. That’s what the journey is about,” Bryant said.

Where does Fisher’s shots rank among his individual accomplishments?

“Maybe 100, 101, something like that,” Fisher joked. “Naw, obviously, personally in the last couple of years, leaving this team and playing with these group of guys, it ranks up there at the top. Even greater than .4 because I feel like we’re as close as possible to our end goal.”

I have a responsibility to my team that if I’m going to be on the floor then I have to make a difference. None of us can’t continue to expect Kobe’s gonna save us. We have to be willing to take responsibility, accountability. I felt bad because Pau was kicking it out to me for some wide-open threes that I was missing. I promised him that I was not gonna miss those shots anymore even though Kobe was the guy who passed it to me, the last one I hit, I thanked Pau for warming up my elbow.”

Speaking of elbow, it was Bryant’s right elbow that knocked Nelson to the floor that allowed Fisher to step into an open 3-pointer with 30 seconds left in OT. As Fisher jogged back, he had the look of a champion.

“I just sensed it was the dagger. That was the one that would put us in a position to close out the game,” Fisher said.

It was similar to the play that Michael Jordan made during the 1997 NBA Finals when he drew a double team and kicked it out to Kerr, who swished a jump shot at the top of the circle that ultimately knocked down the Utah Jazz and gave the Chicago Bulls ring No. 5.

When Fisher was asked if he now considers himself a Mr. Big Shot, ala Robert Horry, he said he’s a few rings short of joining Big Shot Bob.

“I definitely don’t compare myself to Robert Horry. I’m quite a few rings shy of where he stands. He’s in his own category,” said Fisher, who credited his teammates and Phil Jackson for sticking with him despite his early struggles in the game. He finished with 12 points in 42 minutes.

“Just the way he’s willing to stick certain people that he believes can get the job done, and that is not always about statistically what this guy’s gonna bring to the table,” Fisher said of Jackson. “When this guy or these guys are on the floor together, as a coach he’s confident in those five guys’ ability to win a game. We had that type of group before, where it was myself and Kobe and Robert, and Rick Fox and Shaq. Those were the five guys, I don’t care who we were playing, those were the five guys who were gonna finish a game. With Trevor Ariza’s development, we have that five guys now that consist of Pau, Lamar, Trevor, Kobe and myself, we’re kind of becoming those five guys that when the game is on the line, more times than not, those are the five guys you’re gonna see out there.”

On the shot that sent the game into overtime, Fisher said the play was initially designed for Bryant, which was to be expected.

“The ball will always be in Kobe’s hands down the stretch unless the defense does something to take it away. When they trapped him, he kicked it up to Trevor and then he kicked it up to me,” Fisher explained. “Initially, I didn’t catch the ball cleanly so I wanted to make sure I gained control of the ball. I checked the clock really quick, as I continue to kinda dribble one dribble, two dribbles, three dribbles, I just noticed that Jameer was backing up and backing up and backing up and I just decided to go up and shoot. I felt like I had the space he wasn’t close enough to deter me from shooting. In that split second, I made the decision and it worked out better for me.”

If Fisher was the main hero of the game, there were too many guys who got the goat tag and all of them were on the Orlando side of the court, starting with Magic coach and ending with Nelson.

“We thought 11 seconds was too early [to foul], especially with the way we were shooting free throws,” said Van Gundy, whose team was 22-for-37 from the foul line in Game 4 and was 11-for-19 in the fourth quarter and in overtime.

“In retrospect, we gave him so much space to shoot the ball. We played him like we tried to prevent the layup,” Van Gundy continued. “We denied Bryant the ball, but we just didn’t play Derek Fisher. We didn’t guard him. It was my decision not to foul, and yes I regret in now but only retrospect. To me, 11 (seconds) was too early. I’m gonna have to look at it again.

“That will haunt me forever. We could have played that a lot better.”

In a postseason that has seen Orlando get victimized by big-time, game-winning shots in each round, Fisher’s shots will ultimately be the ones that will leave the deepest scars for Van Gundy and the Magic.